The origin and history of the Basque txakolí

From being produced for home consumption to being served worldwide

The tight bond between the land, the sea and tradition has been, and still is, one of the main traits of Basque identity, of which the txakolí is a clear reflection.

The first references to this wine of which we are aware date back to the 9th C., with documents that talk about the production of wine in Basque lands, while, during the 12th and 13th C., the production of txakolí was quite widespread.

However, this production was restricted to home consumption in farms⎯‘baserri’ in Basque. This wine is believed to have been named after this use that it was given, precisely from the combination of the words ‘etxeako hain’ (enough for the household).

At times it was even used as an exchange item between nearby villages or as a beverage for sailors and mariners. The link between the sea and this wine is seen in the fact that the bones of the whales fished by Basque fishermen were sometimes used to make structures to help the growing of the vine. 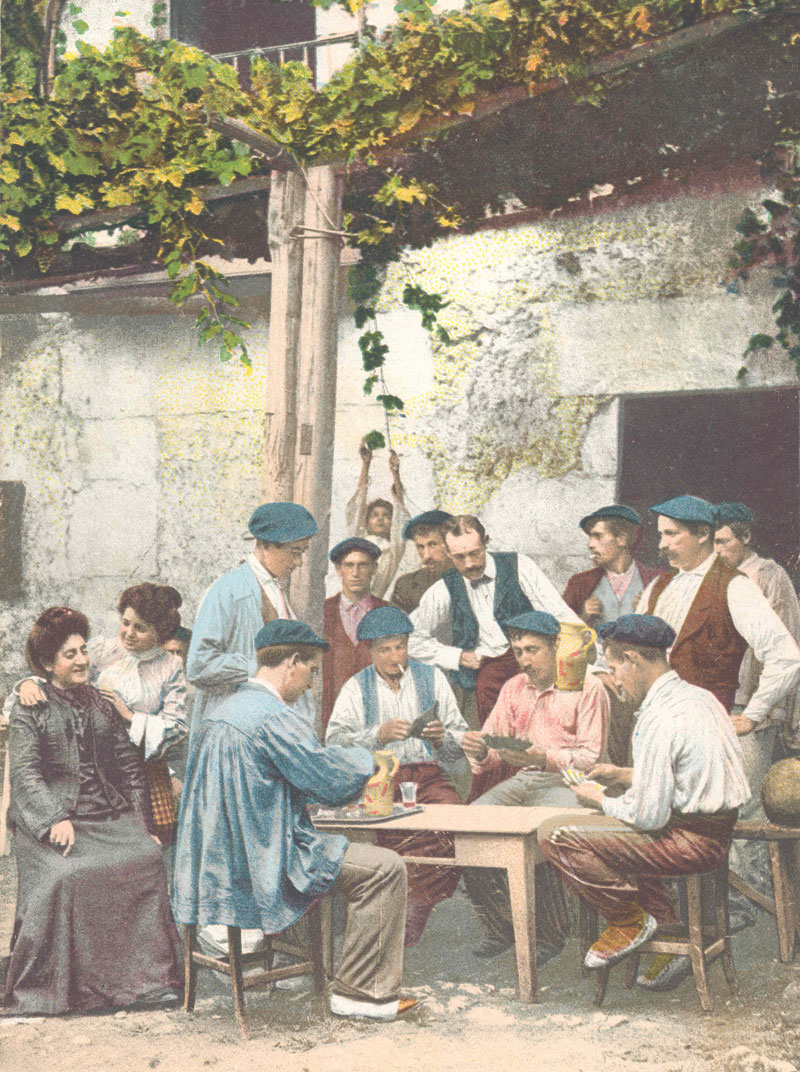 By the end of the 19th C. a certain type of establishment called ‘chacolines’ emerged as taverns where people would gather to drink local txakolí and eat dishes made of cod, squid and elver.

After this peak, and at the beginning of the following century, the vineyards dedicated to this wine disappeared completely, mainly due to three factors: the fierce competence of foreign wines, the rural exodus as a result of industrialization and several plagues like phylloxera, mildew and powdery mildew.

In the 1980s, some vine-growers joined forces with the aim of recovering the cultivation of the varieties of grape Hondarribi Zuri and Hondarribi Beltza, ultimately striving for a revitalization of this sector.

Thanks to the work that has been carried out for the last couple of decades under the protection of three designations of origin⎯namely –Getariako Txakolina, Bizkaiko Txakolina y Arabako Txakolina– this wine has achieved great popularity, even at a worldwide level, where it is held in high regard due to its singularity, typicity, character and freshness. All this stems, once again, from the equilibrium between tradition and the research and innovation of qualified individuals.

We use cookies on our website to give you the most relevant experience by remembering your preferences and repeat visits. By clicking “Accept”, you consent to the use of ALL the cookies.
Cookie settingsACCEPT
Manage consent

This website uses cookies to improve your experience while you navigate through the website. Out of these, the cookies that are categorized as necessary are stored on your browser as they are essential for the working of basic functionalities of the website. We also use third-party cookies that help us analyze and understand how you use this website. These cookies will be stored in your browser only with your consent. You also have the option to opt-out of these cookies. But opting out of some of these cookies may affect your browsing experience.
SAVE & ACCEPT